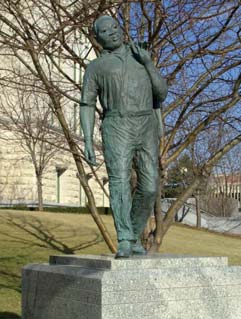 This 300-pound bronze statue of a 26-year-old Dr. Martin Luther King, Jr., cost $25,000 and was first unveiled in the Capitol rotunda on Jan. 14, 1988. King is the first non-Illinois resident to be honored with a statue. Then Secretary of State Jim Edgar said King “merits this special recognition for his contributions to Illinoisans of all colors and creeds.” The statue was moved outside of the Illinois State Museum in 1989. In May 1993, the statue was moved to its current location at “Freedom Corner,” facing the Abraham Lincoln statue, and was rededicated on Sept. 18, 1993. Sculptor: Geraldine McCullough, 1988